Back at the start of May I could not have been happier that I’d picked up a pair of Saucony Endorphin Speeds. I had some PB’s and they were seemingly everything the reviews had said. A few weeks later during a mid week training run something went wrong. At the time I didn’t make the link but the injury I sustained then became a recurring niggle when running in these shoes.

On the cool down home my left, outside, upper calf muscle just went “ping”. I ended up hobbling home and needed days off. I think it took about 2 weeks before things got back to normal.

As I continued training and building to running a marathon the “ping” would come back when running fast. It didn’t stop me but I was concerned it might. I still didn’t blame the shoes as I’d never had a shoe specific issue before. Once I picked up the Nike Alphafly’s and started using them for my quick runs, I noticed no “pings”.

My coach and I decided it was time to remove them from my shoe rotation to avoid risk.

After the marathon I decided to give them another go and it was pretty much straight away that the “ping” came back.

I am not sure what is causing the issue, whether it’s the nylon plate or something else but these shoes are not for me. My coach has also said that other runners he trains had issues with the Speed’s so there must be something.

So for now the Saucony Endorphin Speeds are seeing out their days logging some slow, easy miles.

My running 🏃‍♂️ gear page has been updated and it looks nicer too. I have some things to say about the Endorphin Speeds at some point and there is a new shoe on its way that will hopefully fill the tempo/interval gap.

Look at this medal. It’s so good. 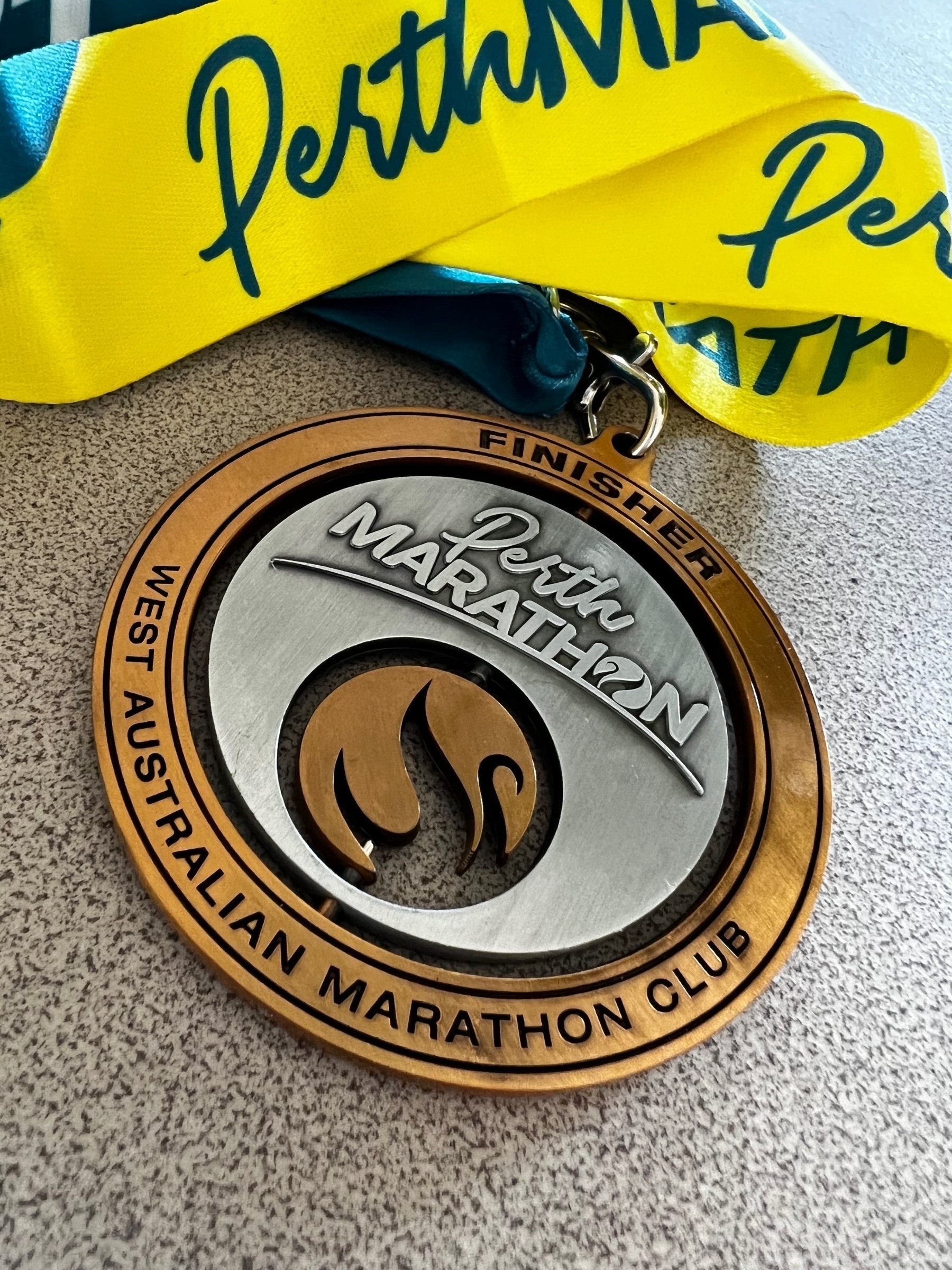 After running on Sunday I realised that I would not be able to maintain my planned marathon pace for the Sunset Coast Marathon. Being sick for more than 2 weeks has taken its toll and I still need a week to get back in shape. With less than 4 weeks to go, I had to make a decision of what to do.

I was talking to my colleague at work and she reminded me of the Perth Marathon. The last I checked it was not confirmed and the date did not fit well into some holiday plans that I had previously made. In checking again, the Perth Marathon is taking registrations and better still, it will go ahead a week later on the 17th October.

Last night my running coach and I sat down over video call and started to look at the next 2 months of training and now focusing on the Perth Marathon. Everything has worked out great and he has even accommodated my daughter's birthday, Father's Day and my holiday to Broome.

One of the best part of the training schedule is that I will still run the Sunset Coast Marathon in 4 weeks. I will use it as a "18 mile" marathon pace training run. This means I will run easy for about 3km then 29km marathon pace and then run easy/jog into the finish line (~10km). In doing the maths on the paces there is a chance I could even walk away with a marathon PB. 😎

I am now trying every remedy to stay not sick and hoping everything goes to plan.

(Yeah an hour behind Nike and I could sing a Queen song about it. 😁)

Now if only I can find a marathon in Perth that is confirmed (City to Surf cancelled, Perth TBC, Sunset Coast TBC/slow) and not on my daughters birthday (Bibra Lake).

I want to break 3

As with the many things in life at the moment, I received news that the Bunbury Marathon had been cancelled for 2020. At first I felt like I would finish my training, run the 42km on the same day and be happy with completing my recovery. After sleeping on it, I realised that I really wanted my come back to happen at an event, I wanted my family to cheer me on and hold up the medal to signify my recovery was complete.

So my plan now is to focus on some strength training over the coming weeks and follow Hal Higdon’s Base Training programme. That will lead pretty perfectly into training for the Perth Marathon, which will be held on the 26th of September. I am hopeful that this is far enough away that the event will go ahead.

It’s funny that I thought this would bother me more than it has, but there really is more important things in life. I have recovered amazingly well from my back surgery and I don’t need a marathon to prove it, but it will be the icing on the cake.

One of my joys of running is churning through my podcast queue. It’s great for just zoning out and enjoying the run.

When I upgraded to the Apple Watch Series 4, I chose the cellular version so I could leave my iPhone at home but still be reachable and call for rescue if needed (which has happened). I had a hope that I could listen to podcasts by syncing or streaming directly to my watch. As far as a I know the only apps that work independently from the watch (and still have an iPhone app) are Apple Podcasts, Overcast and Castro.

Overcast is what I currently use, it’s not perfect and has bugs but they are not show stoppers. It offers local sync which is good once the sync is done. Without streaming though, I have to be super organised and make sure there is enough synced episodes. Bugs - the app ignores the tap gestures set for my AirPods so I still need to skip via the watch directly. It also doesn’t always sync played episodes back to the iPhone, so I have to do that later myself.

Apple Podcasts is a strange beast. The app itself just doesn’t fit my workflow. I also tried it on a run and it played episodes that had synced (I think) but could not stream other episodes. I’m not sure if it can stream, it doesn’t give any indication either way.

On paper Castro is my perfect podcast app offering both playback via sync or streaming directly on the Apple Watch. The killer bug is that once one episode completes and starts playing the next it seems to skip random amounts of time. This can actually be to the end of the next show. I find myself running along tapping the “back 30 seconds” until it hits the start - not fun.

I have contacted the developer(s) of both Overcast and Castro pointing out the bugs and Castro devs said they will investigate.

Hopefully in the future I can live the dream and to be honest Castro is close. I have to wonder if this is more of an Apple issue not providing developers the tools they need. I really wish developers of podcast apps would show us (me) runners some love.

I have been running for around 6 years now and whenever I plan on running a marathon I follow one of Hal Higdon’s programmes. I find them easy to follow and with nothing too complicated.

Currently I am following Marathon Advanced 2 but I have previously used his other programmes. There are options to pay for extra guidance but there is no requirement. He provides programmes for all distances and I recommend checking them out

If you are up for running more km’s per week than what the plan suggests, Hal has said that you can run double up days to add more. For example 5km in the morning and 5km in the afternoon. As long as you follow the base programme he is happy. I was hitting 100km per using this technique and it really felt ok - until my back needed fusing (unrelated). Hopefully I should be back doing this next year.